Women of the Bible Wiki
Register
Don't have an account?
Sign In
Advertisement
in: Old Testament, Mothers, Concubines,
and 3 more

Hagar was the maidservant of Sarah, Abraham's wife, who had a son with Abraham, named Ishmael. However before Ishmael was born, Hagar despised Sarah so Sarah dealt harshly with her, causing Hagar to run away. However after an encounter with an angel, she returned and gave birth to Ismael who became the father of his own nation.

Maidservant of Sarah, Consort of Abraham, Mother of Ishmael

In Genesis, Hagar is described as the Egyptian maidservant of Sarah. Since Sarah was barren and was unable to have children, she told Abraham to "go into" Hagar, so that she might have a child by Hagar. So Sarah gave Abraham Hagar to be his wife, and Hagar became pregnant.

However, after becoming pregnant, Hagar started to hate Sarah, her mistress. So Sarah began mistreating Hagar, so Hagar eventually ran away from Sarah to a spring in the wilderness.

In the wilderness, an Angel of the Lord met with Hagar and instructed her to return to her mistress and promised her that her descendants would be great and that her child would be a strong wild man and would dwell in the presence of his brethren. So Hagar named the place Beer Lahai Roi and she returned to Sarah and Abraham and had a son whom she named Ishmael.

Sometime later Sarah had a son, whom she named Issac. However, when Issac was weaned, Sarah caught Ishmael scoffing at Issac and Sarah demanded that Hagar and Ishmael be sent away, and God commanded him to listen to his wife, so he sent Hagar and her son away with some bread and water and they wandered in the Wilderness of Beersheba.

When all of the water was gone, Hagar placed Ishmael under a shrub and sat opposite from him so that she would not see him die, and she wept for him. However, God came to her and instructed her to rise and and promised her that a great nation would come from her son and He opened her eyes and He showed her a well and they both got a drink.

Hagar and Ishmael then lived in the Wilderness of Paran and Ishmael became an archer and Hagar took a wife for him from Egypt.

Hagar was the mother of Ishmael who bore twelve princes: Nebajoth, Kedar, Adbeel, Mibsam, Mishma, Dumah, Massa, Hadar, Tema, Jetur, Naphish, and Kedemah.They dwelt from Havilah as far as Shur. Ishmael also had a daughter named Basemath, who later became one of the wives of Esau.

Hagar and Ishmael being dismissed by Abraham 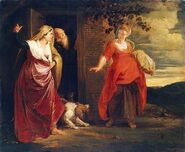 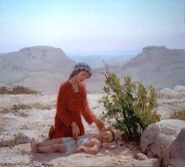 Hagar and Ishmael in the wilderness
Community content is available under CC-BY-SA unless otherwise noted.
Advertisement