Rebekah (Rebecca) was the wife of Isaac and the mother of Jacob and Esau. She was also the sister of Laban and the aunt of Jacob's future wives: Rachel and Leah. Rebekah first watered the camels of Abraham's servant who was sent to find a bride for his son Issac. Rebekah then left her home with the servant and married Isaac. Rebekah later became the mother of Jacob and Esau and she helped Jacob deceive Issac into giving Jacob the family blessing

Rebekah is first mentioned in Gen. 22: 23 as the daughter of Bethuel, Nahor's son. When Abraham was getting very old, he sent his oldest servant to find a wife for his son Issac, from among the women of Abraham's home land. So the servant went out and stopped at a well to water his camels and he prayed that God would show him the proper woman for Issac by allowing the right one to give him a drink and to water his camels for him. Before he finished speaking, Rebekah, who was very beautiful in appearance (Gen. 24: 16) came out and filled up her pitcher, and the servant asked if he could have a drink from her pitcher. Rebekah quickly gave the pitcher to him so that he could drink and she also watered his camels. Afterwards, the servant gave her a golden nose ring and two bracelets and he asked whose daughter she was and she replied her father was Bethuel and she offered him straw, feed and lodging in her home. After the servant praised God, Rebekah ran home to tell her mother what she had seen.

After hearing Rebekah's story, her brother Laban ran out to greet the servant and he invited him to stay at their home. After they ate, the servant told Rebekah's family of his mission and of his meeting with Rebekah and he requested that Rebekah come with him to be Isaac's wife. Laban and Bethuel then allowed Rebekah to go and the servant praised the Lord and gave Rebekah silver and gold jewelry and clothes and he gave gifts to Laban and her mother. The next day the servant requested to leave with Rebekah, but her family protested that she should stay ten more days, then she could go, but the servant pleaded with them, so they decided to ask Rebekah what she wanted to do and she decided to go then. So after a blessing from her family Rebekah took her nurse and her maids and rode on camel until she saw Isaac in the fields meditating. She asked the servant whom he was and he told her it was his master, so Rebekah took a veil and covered herself (Gen. 24: 65). Then after the servant reported to Isaac what had happened, Isaac took Rebekah into Sarah's tent and she became his wife and he loved her.

The Mother of Jacob and EsauEdit

Isaac was forty when he married Rebekah. Issac pleaded with God to give Rebekah children, and the Lord heard his request and granted it and Rebekah conceived. However, "the children struggled together within her" and Rebekah worried about what was wrong, so she went to ask the Lord. God told her that she had two nations, two people, or two sons within her womb and that one (Jacob) would be stronger than the other (Esau). When Rebekah gave birth the fisrt son to come out was Esau and the second, Jacob. Isaac loved Esau, but Rebekah favored Jacob more.

Sometime after the birth of Esau and Jacob, there was a famine and Isaac and his family went to the king of the Philistines, King Abimelech. When Abimelech asked Isaac of Rebekah, he told them that she was his sister, so that he might not be killed because of her beauty. However, a long time later, Abimelech saw Isaac showing love to his wife, and he told Isaac to tell the truth, which he did confess that Rebekah was not his sister, but his wife.

When Isaac became old and he could not see, he told Esau to gather food for him so that he might bless his son, but Rebekah wanted Jacob to receive the family blessing instead. So she dressed him up in Esau's clothes and she put fur on him and prepared food for Isaac and sent Jacob to deceive Isaac. However, when Jacob received the blessing instead of Esau, Rebekah feared for Jacob's life and she told Jacob to flee to her brother Laban's house. Sometime later, Rebekah's nurse Deborah died and was buried. Rebekah's death is not mentioned in the Bible.

Rebekah was mentioned by Paul in one of his letters to the churches in Romans 9: 10-12 about Rebekah being conceived through their ancestor Isaac and God's answer to Rebekah's prayer by saying to her "The older shall serve the younger".

Rebekah at the Well with the Servant 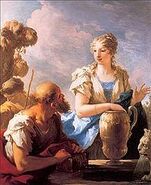 Rebekah at the Well
Add a photo to this gallery
Retrieved from "https://womenofthebible.fandom.com/wiki/Rebekah?oldid=4153"
Community content is available under CC-BY-SA unless otherwise noted.